I recently set myself the task of reading all of the Frank Herbert Dune books, and the additional prequels written by Kevin J Anderson and Brian Herbert. Fourteen books in all. What spurred me on to do this was coming across the first set of Dune prequels in a second-hand bookstore and reading them for the first time. These prequels — House Atreides, House Harkonnen and House Corrino — sustained my interest and re-ignited my enthusiasm for the Dune Universe.

So here I go. This is not a formal review — I don’t pretend to be a SF critic — this is just me with a journal, sitting in a coffee shop, writing down my thoughts after reading the book; as insightful, incomplete or tangential as they were . . . 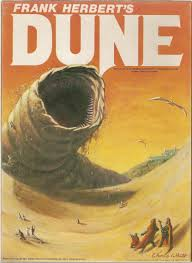 Herbert’s world has amazing scope, and its creation is an incredible achievement.

Re-reading this book after so many years was a different experience. I can see now how frustrated I would have been as a younger reader at the lack of action.

As an older reader, I could appreciate Herbert’s writing much more.

I would have to say though, for all the confusing wordage of his pre-chapter ‘wisdom’ excerpts and his in-prose philosophical insertions — which occupy much of the prose and dialogue — I have taken away no powerful insights. For me there was no true transfer of wisdom, no higher knowledge. At worst I felt the Herbert was sewing confusion and word-games that sounded profound, but which he himself had no personal stake in. His own beliefs and thoughts remain unstated. Basically, these extended sections of dialogue were literary smoke and mirrors. I concluded that this is in effect a form of delayed resolution to draw the reader on, where many questions are raised, yet no conclusion is ever delivered. And no truth.

The main focus of Dune’s narrative is the inner experience and transformation of Paul. I was impatient with this when I first read Dune. On this second read, may years later, I appreciated Herbert’s prose expression, yet felt he failed to convey a true transformative experience, falling back into word-puzzles and a philosophical mish-mass that implied significance without delivering.

The fact of genetic memory is a central premise of this world. I cannot accept this as a credible basis. This does not make sense to me from a scientific point of view.

Herbert’s novel implies telepathy through contact in the spice ritual that creates the Reverend Mothers, yet the mechanism or actuality is unclear.

The idea of a Mentat is sound, yet Thufur fails to convince me as a character. We are told he is a master assassin and mentat, yet he never actually shows us anything to convince us of this. And believe me — I wanted to believe it! I wanted to see it!

The Bene Gesserit are done well – you can see directly how their training gives them advantages. You can credit this, and it is shown directly through Jessica as a character. The Bene Tleilaxu are vaguely presented in this first book, but intriguing.

All up I enjoyed the return to the world of Dune, and enjoyed Herbert’s prose. He has created a in-depth and convincing world that has remarkable texture and is a pleasure to visit.