Here is a little bit of Chemical Engineering in Space.

So much of what we come into contact with is made of four elements – carbon, hydrogen, oxygen and nitrogen – the main elements of living systems. Add phosphorous and sulphur and you have what comprises 98% of all living systems.

The chemistry for juggling these four atoms – C, H, O, N – has been around for a long time.

Engineers and scientists have been confident enough in the chemistry and the various ways of manipulating them to propose various sets of reactions for use in gathering resources out in the vast reaches of space, as part of human exploration. This is part of a wider field of study called In Situ Resource Utilisation (ISRU), which has formed a key part of plans to explore other part of the solar system, particularly Mars, for the better part of two decades.

To react hydrogen with the Martian atmosphere to produce methane and water – very useful things to have on the red planet. The methane would be stored and kept for use as rocket fuel.

Methane and oxygen are a handy combination. In terms of chemical rocket propellant candidates, the Specific Impulse (Isp) of Methane and Oxygen at 3700 m/s is second only to Hydrogen and Oxygen at 4500 m/s (to convert to seconds of impulse multiply by 0.102).

Meanwhile the water from the Sabatier reaction would be split via very familiar electrolysis reaction:

The idea was that only the hydrogen would need to be transported to the Red Plant. H2 weighs a lot less than CH4, freeing up space and payload for the 6 months transit to Mars.

Various test rigs were constructed on Earth, using analogues of the Martian atmosphere, which has been well characteristed since Viking. Mars has a lot of CO2 – more than 95% of the atmosphere – and a nice analogue of the Martion atmosphere right down to the low pressure could be similated for the rig. The CO2 is initially absorbed onto zeolite (an ever popular sorbent) under conditions simulating the Martian night. During the Martian ‘day’ the CO2 desorbs and passes into the Sabatier reaction vessel with the H2, which is heated to 300C. Reaction then occurs in the presence of the right catalyst (in this case pebbles of ruthenium on alumina). The water from the reaction is condensed out and passed to the electrolysis unit.

OK. Not surprisingly scientists and engineers planning Mars missions were concerned about overly complex systems forming such major part of a critical path.
Current plans for ISRU on Mars revolve around direct dissociation of the Martian atmosphere i.e.

The current Mars Design Reference Mission proposes the production of oxygen on Mars through direct dissociation. Methane will be transported directly from Earth, with the ascent vehicle still using the tasty combination of methane and oxygen in its rocket engines.

So how is the CO2 pulled apart? There are many contenders, all of which uses a lot of energy. On Mars that energy is currently planned to be delivered by a 30 kW fission power system.

The front-runner for CO2 dissociation is thermal decomposition, followed by isolation of the O2 using a zirconia electrolytic membrane at high temperatures.

This system was developed for its first flight demonstration as the Oxygen Generator Subsystem (OGS) on the defunct Mars Surveyor Lander, which would have been launched in 2001 (but was cancelled following a string of Mars mission failures – Mars Climate Orbiter (1999), Mars Polar Lander (1999), Deep Space 2 Probes 2 (1999). That was a bad year. ).

The OGS was to demonstrate the production of oxygen from the Martian atmosphere using the zirconia solid-oxide oxygen generator hardware. This unit was designed to electrolyze CO2 at 750C (1382 F). The Yttria Stabilized zirconia material – once a voltage is applied across it – acts as a oxygen pump allowing the O2 to pass through it and be collected. The plan was to run the unit about ten times on the surface.

As I mentioned there were various contenders for the process. Such as molten carbonate cells, which operate around 550C with platinum electrodes immersed in a bulk reservoir of molten carbonate. Personally, the engineer in me shudders at the thought of trying to manage any sort of molten system that remotely.

The final system for CO2 decomposition used on Mars is probably still a work in progress. It will be interesting to see what develops there.

The fact is the initially proposed Sabatier reactions did not produce enough O2 to react with the methane, so some form of CO2 splitting process was still required.
So there are some things we can do to juggle molecules when we get to Mars.

Is everyone out there looking forward to getting to the Red Planet and grappling with what we find there? 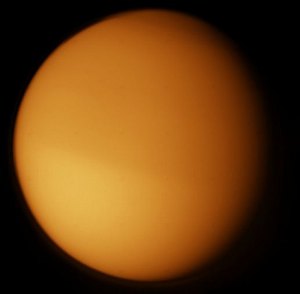 I’ve always been fascinated by Titan. The idea of a moon in our solar system that has an atmosphere has always intrigued me – and it’s the only one in the whole solar system with more than a whiff.

Bigger than Mercury, if it was orbiting the sun Titan would make an impressive planet in its own right. It is the second-largest moon in the solar system, coming in just slightly smaller than Ganymede, and is twice the size and ten times the mass of poor demoted Pluto. Discovered in 1655 by Christiaan Huygens, Titan is an old friend.

Like Venus, until recently its surface has been obscured by cloud. However unlike the hothouse second planet, Titan has an anti-greenhouse effect.

Its distinctive orange colour – pretty familiar now from photographs – is due to a thick organonitrogen haze. In face Titan’s atmosphere is remarkably dense, holding an astounding 7.3 times more per square metre of surface than Earth (1.19 times overall mass). Only its reduced gravity (around 1/7th of earth – 6/7ths of the Moon’s) brings its atmospheric pressure into the highly reasonable range, being roughly one and a half times our own (1.45 atmospheres).

This comparable atmospheric pressure immediately gets me thinking about habitats. You could have fairly lightweight , non-pressurised, structures that maintained a comparable internal pressure to the external environment. Perhaps with an adjusted nitrogen-oxygen mix to bring the oxygen back to 0.21 atmospheres of pressure i.e. 0.21 atm of oxygen pressure with the remainder 1.45-0.21 = 1.24 atm nitrogen, so the actual percent oxygen by volume in the mix is 0.21/1.45 => 15%, yet equivalent to our home-grown partial pressure. Why nitrogen as the balancing gas? There’s heaps of it on Titan!

Titan’s atmosphere comprises about 98.4% nitrogen, with 1.4% methane and the remainder hydrogen. Its thickness also removes the threat of radiation, which is a particular problem for a human presence on the Moon, Mars or asteroids.

Another intriguing reason why Titan is an interesting target for colonisation is the amount of water there. OK. It’s pretty cold: around -179C (-290F). The water is locked up in the planet as solid ice. In fact, it pretty much is Titan ‘rock’. It is estimated that up to half of Titan’s bulk composition is water ice, with the other half rocky material. Volcanoes there spew ‘lava’ composed of water and ammonia.

So the bad news is that you would need some sort of energy source to melt the ice and harvest the oxygen through electrolysis. A nifty little nuclear power plant of the sort proposed for Martian missions would do the trick.

Due to these temperatures, and the light composition of the moon, the ‘methane cycle’ takes the place of the water cycle on Earth. By now descriptions of the vast methane lakes on Titan would be familiar following the descent of the Huygens probe to the surface in January 2005 (wow! Has it really been that long). Based on Cassini data from 2008, Titan bas hundreds of times more liquid hydrocarbons than all known oil and gas reserves on Earth. Now that’s something to consider.

The surface also has many features similar to Earth, despite the difference in composition, such as ‘sand dunes’. Space exploration and settlement advocate Robert Zubrin is keen on Titan, stating “In certain ways, Titan is the most hospitable extraterrestrial world within our solar system for human colonisation”. The nitrogen, methane and ammonia can all be used to produce fertiliser for the biodomes.

Probably the most significant problem (apart from getting there) would be managing the health effects of the low gravity.

So when’s the next bus?