This week’s launch of the Falcon Heavy Booster on Tuesday (February 6) means that Elon Musk’s SpaceX claims the title of world’s most powerful rocket. The Falcon Heavy can carry twice the payload as its nearest competitor, the United Launch Alliances Delta IV Heavy – and at a lower cost. 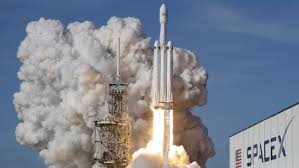 Every time I see footage of the SpaceX boosters touching down on reentry I get a shiver down my spine. This is really some revolutionary technology, driven by revolutionary thinking. All based on the simple premise that the most expensive thing about spaceflight is the hardware – not the fuel. If you can reuse the booster that gets you to orbit, then the whole ball game changes.

The two smaller side-boosters completed their vertical reentry landing without a hitch, but the much larger central booster missed its drone-ship landing and crashed into the ocean. Still, the test is considered a success.

Falcon Heavy can lift an impressive 64 metric tons, certainly more than adequate for the astronaut-come-space-dummy and Tesla Roadster that Musk send into orbit around the sun, which is expected to orbit for hundred’s of millions of years! That’s a hell of a time capsule!

Falcon Heavy launches come at an estimated cost of $90 million, with the Delta IV launching 29 metric tons for between $300 and $500 million per flight. It’s easy to see how SpaceX’s paradigm is changing the future of space travel.

There are two more Falcon Heavy launches scheduled for this year. The first is a communications satellite, and the second a Space Test Program for the US Air Force that will also launch a solar sail for the Planetary Society. As well as the possible launch of two passengers in a trip around the moon. To apply for a ticket, click here – no, just kidding! – but wouldn’t that be awesome?

And this isn’t the end for the development of SpaceX’s reusable launch systems. SpaceX’s BFR (Big F- Rocket), a megarocket capable of a single-stage to orbit fully fuelled, will potentially launch a spaceship carrying up to 100 passengers, taking us further on a development path that might lead to the establishment of a city on Mars – one of Musk’s ultimate goals.

Space exploration is at the heart of my novel The Tau Ceti Diversion! But they got a little further than the asteroid belt!