One of the real mysteries of identified exoplanets is the how many very large planets – the size of our Jupiter and even larger – are so close to their parent stars. This is a strange thing for us Terrans, because in our solar sytem, all our gas giants are in outer orbits. A situation so familiar anything else just seems plain wrong. 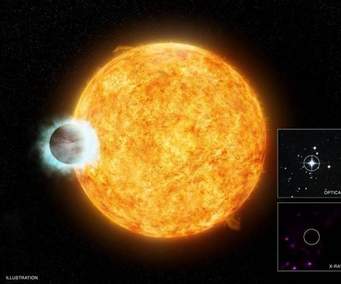 These ‘hot jupiters’ – heated by their proximity to their parent stars – are often in very close orbits to their suns, more equivalent to the orbit of say Mercury in our own solar system.

So how did they get there? Did they form there, or did they somehow migrate there? Were they wandering planets that were captured by their new suns?

At first these hot jupiters were considered anomalies, but as the list of exoplanets grew, astronomers found – to their surprise – that these type of planets were common. So what’s up? Is our solar system really the odd one out? It would be interesting if that was true, since the position of our own gas giants was crucial to the formation of higher life forms on Earth. Jupiter acted like a cosmic vacuum cleaner, stopping the multiple asteroid impacts that would have driven life on Earth back to basics time and time again.

The Spitzer telescope has been observing a hot Jupiter called HD 80606b, 190 lightyears from Earth, that has a highly eccentric orbit, swinging around its star every 111 days.

The theory is that these hot jupiters start out in highly eccentric orbits around their stars (like a very flat or ‘skiny’ ellipse), swinging first closer, then further out from their star. Over a period of hundreds of millions of years, gravitational influences from nearby stars or planets drive them into circular orbits, which are close to their parent stars. Part of this process is thought to be the loss of the planet’s gravitational energy as heat as it passes close to its parent star.

In HD 80606b, astronomers think they are observing one of these gas giant exoplanets in the middle of its migration. We still see the highly eccentric orbit, but it is now swinging very close to its parent star, moving toward its final, closer, circular orbit.

I don’t think we have a hundred million years to find out if this theory is correct, but at the rate our exoplanet discoveries are coming in, we will certainly have more data, and perhaps enough snapshots of multiple hot jupiters to get a good idea of exactly what’s happening in solar system formation.