So you want to estimate surface gravity on a fictional planet? Easy!

One of the things I had to do as part of the rework of my novel The Tau Ceti Diversion, is to try and work out the surface gravity of my fictional planets. From the Kepler data, there are two exoplanets located in the Tau Ceti system that are likely to be in the system’s habitable zone, or where there is the possibility of liquid water on the surface, and perhaps life as we know it.

To play around with my estimates of gravity, I used ratioed rearrangements of Newton’s law of gravity (law of universal gravitation) and a simple formula relating the density of a spherical planet to its mass and radius (these are at the bottom of the post in the ADDENDUM).

The two planets thought to be in Tau Ceti’s habitable zone are denoted Tau Ceti e and Tau Ceti f. What is known about these two planets is their likely orbit, eccentricity, and their mass. All of these properties have been derived by calculation, based on observed data, so are all known to within appropriate error bounds, but I’m leaving the error off my scribblings so things don’t get too messy.

So, here’s where I cheated a bit, like any good engineer. I started with the answer I wanted and calculated backwards to see if the answer I wanted led to reasonable base assumptions. This is not as cheeky as it sounds, because when you have an insoluble problem (i.e. not enough data is known for an explicit result), an iterative approach is often used.

For my story to work, I needed a surface gravity on my planet of no more than 1.2g – that’s twenty percent higher than Earth’s. But how could I get a gravity that low on a planet that was over 4 times the mass of Earth? The answer is that surface gravity is a function of mass and radius, or going a step further along the calculation path, mass and density.

The density of Earth is 5.514 g/cm3, not too much different from the density of a rocky planet like Mercury (5.427 g/cm3), but a lot higher than other solar system planets like Jupiter and Uranus (1.326 g/cm3 and 1.27 g/cm3 respectively), comprised of lighter materials. A surface gravity of 1.2g on Tau Ceti e would put its density at around 3.5 g/cm3, less dense than our own rocky planets, but certainly in a feasible range.

So what sort of densities would you expect for the Tau Ceti system? One clue is the metallicity of the system, which is a measure of the ratio of iron to hydrogen in the star’s makeup. In the case of Tau Ceti, this is estimated to be around one third of our own sun. This indicates the star is likely to be older than the Sun, made up of stellar remnants left over from less evolved stars that have not had time to form as much of the heavier elements in their internal fusion factories.

So Tau Ceti is made up of lighter elements. Based on this, it was reasonable to assume that the planets in the Tau Ceti system would also be made up of proportionally lighter elements, and quite possibly in the range I had estimated. Tau Ceti e and Tau Ceti f are also large planets – much larger than our own Earth – so having a density in between Earth and our own gas giants also made sense to me.

Using the same planetary density I had calculated for Tau Ceti e, for the larger Tau Ceti f, gave me a surface density of around 1.4g for the bigger planet – just a little too high for feasible human colonisation – and that fit nicely with my story as well.

It was a lot of fun playing with these calculations, and thankfully the known science fit with my story, at least with some comfortable wiggle room!

Check out what challenges that increased gravity provided for my intrepid explorers in my novel The Tau Ceti Diversion! 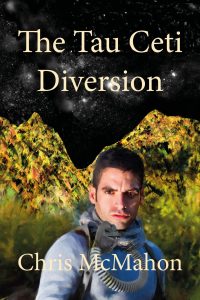