The Juno spacecraft’s JunoCam camera is now operational, and is sending data back to Earth. The camera was switched on six days after the exploration craft entered orbit around Jupiter. Although the first high-resolution images are weeks away, we have our first assembled image of the planet. The shot below was taken at a distance of 4.3 million kilometers from Jupiter (2.7 million mi) as it was moving into its capture orbit. Our remote pair of eyes, JunoCam, captured an image of Jupiter, complete with Great Red Spot, and shots of three of Jupiter’s four bigger moons. 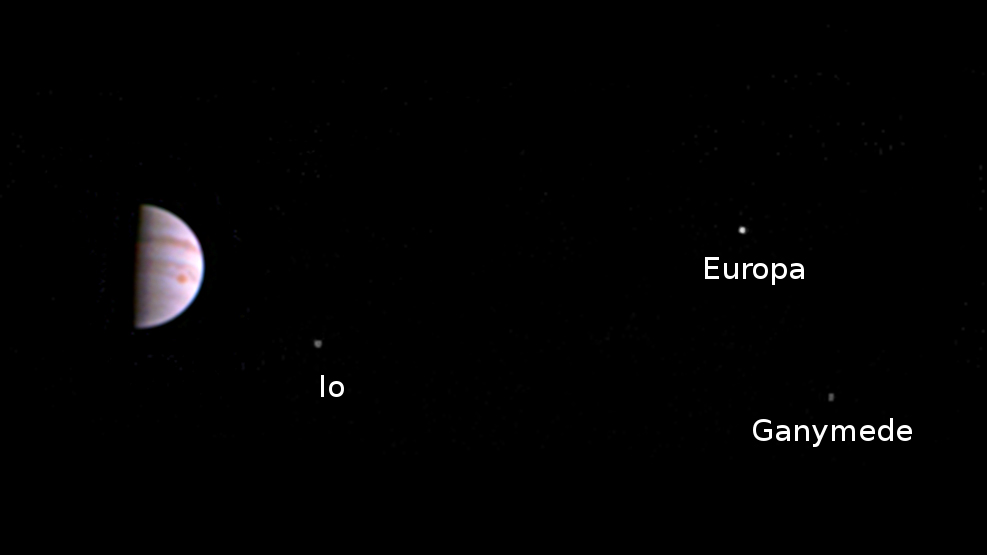 It’s fantastic to have received this tangible evidence of Juno’s operational status, and its survival of the extreme radiation that surrounds Jupiter. Juno has been specially designed to cope this this intense radiation environment, which can cause degradation of the spacecraft and instruments, noise from particle collision with detectors, and electric charging of the spacecraft itself. And Jupiter has a lot radiation to share. The huge planet’s magnetosphere extends out to 100 Jupiter radii – pretty astounding when you compare it to Earth’s magnetosphere, which extends to 10 Earth radii. This magnetosphere acts to concentrate and reflect solar radiation and cosmic rays from outside the solar system, and holds gases, like those ejected by Io’s volcanic activity, which get ionized and energized and emit their own radiation.

Juno’s detectors and electronics are shielded by a half-inch thick titanium vault. Its external camera also has additional shielding – enough to make it four times heavier than even the biggest star trackers to date. The spacecraft’s orbit has also been specially designed to avoid the most intense radiation zones.

In completing its mission, Juno will orbit Jupiter 37 times, going as low as 4,100 kilometers (2,600 mi) over the planet’s cloud tops. Juno’s scientific instruments will probe beneath the cloud cover and also study its auroras, allowing us to learn more about Jupiter’s origins, structure, atmosphere and magnetosphere.

JunoCam will continue to send back images on each of its many capture orbits.

But for our first high-resolution images, we will have to wait until August 27 when Juno makes its next close pass to Jupiter.